When I looked at SDRS 2019 brief I was not confident how I was going to approach that project because I did not have experience in animation for games. Before that project I just animated idle and simple kick sequences with Stewart rig from Animation Mentor school. However, I have decided that game animation  will be my specialism at university so I could devote enough time for that project and improve in areas which I have not discovered yet. I have done creature and character animation before so this project was something new and refreshing for me.

With this project I have used the Hare rig by Arman Musovic (http://thinkinganimation.com/portfolio/hare-rig/ ) with particle accelerator -pistol models by comrade1280 ( https://www.cgtrader.com/free-3d-models/military/gun/particle-accelerator-pistol). As brief says, I could choose random rig to create 4 game animation sequences. I did not check whether it is possible to export it to UE4 due to the lack of time. I know how to do it, but I just wanted to focus on animation because I am not rigging artist to fix issues which usually appear during moving rig from Maya to UE4. I like that character because he is really cartoony and I could push animation a lot to make it more entertaining. Also, I challenged myself in creating serious animation with “Bugs Bunny”. I suppose if I can do serious animation with character like that, then in the future I could make something really dramatic with, for example, monster rig.

In terms of what kind of game this animation set would fit into, I’ve decided to animate the character as if it was for a game like League of Legends or Heroes of Might and Magic. In that kind of games character moves are not limited due to the fact that players usually do not have camera control during a battle.

When I looked at the design of the rig, I have decided that I will fill up character personality worksheet which is going to help me in figuring out what will drive intentions, feelings and characters movements. Even though I have changed some details during animation, it helped me a lot to add depth in character’s actions.

My concept was to make him impulsive, impatient, very agile killer who knows perfectly how to use all types of guns. Creating elastic and really quick movements are suitable to a hare and they look dramatic and appealing to me. Additionally, they remind me Naruto or Overwatch which I just love. That is why character does what he does.

My animation sequence is as follows:

Character is waiting impatiently for battle, looking around and trying to find anyone who he might shoot.

In this state he will clap eyes on somebody and will become tense and surprised in a way. He will then get into a combat position to be prepared to shoot whoever might it be in front of him.

In release state the character immediately jumps to avoid any coming attack and shoots particles from both of his pistols in midair to give a damage surpisedly to the enemy. The power of his weapon makes him do spin in the opposite direction of a shoot and he lands after that. Then, he jumps  and makes forward roll, but in a similar way to Max Payne’s (Max Payne 3 - slow motion jump forward). After that, he shoots and spins backward to have a rest.

The character stands up on just one leg and he breathes smoke from pistols in with a pleasure as crazy man and then he comes back to idle state.

Overall I am quite delighted with how the project turned out. I suppose I did fine with the time constraints that I had, but I always have a feeling that I could do better. However, I am pleased with how much I have learned and that I am one step closer to the animation industry. 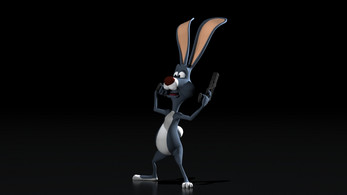 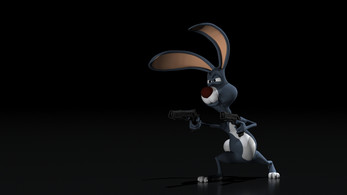 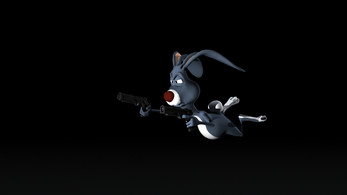 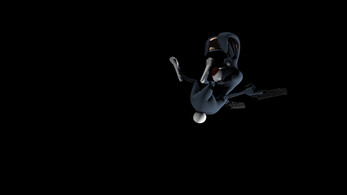 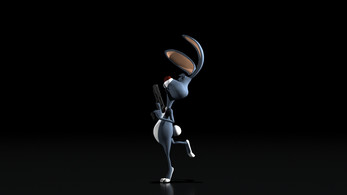